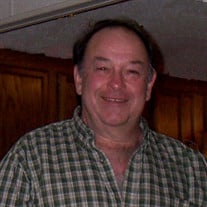 Wayne Jeffrey Seiller Sr., 71, of Bowling Green, MO., left this world to be with his Heavenly Father on Tuesday, September 5th. Memorial services will be held at 7:00 pm on Wednesday, September 13, 2017 at the Bibb-Veach Funeral Home in Bowling Green with Rev. JR Brown officiating with military honors being conducted by VFW Post #5553 and the Missouri Military Honors. Visitation will be held from 5:00pm until 7:00pm on Wednesday, at the funeral home. Wayne was born on April 13th, 1946 in St. Louis, MO, the youngest of 4 children to Walter and Pearl Seiller. He married Nellie Rose Hansen, daughter of Ronnie and Juanita on October 25th, 1974 at Curryville Baptist Church in Curryville, MO. She survives. Other survivors include, his daughter Pearl Marie Griffin and wife Jacque of Glen Carbon, IL; son Wayne Jeffrey Seiller Jr of St. Peters, brother Walter Joseph Seiller Jr. of Wright City and sister Jacqueline Price of MO, his grandchildren Wayne Jeffrey Seiller III and Paul Ryon Seiller; and Hannah Grace, Adam Jackson, and Andrew Seiller Griffin, and many beloved nieces, nephews, and cousins. He was preceded in death by his parents, mother and father-in-law, his sister Phyllis Ann Alt, brothers-in-law Gerald Alt and Jim Hansen, and his sister-in-law Geraldine Seiller. When he was still a babe in arms, his family moved to rural Bowling Green where he and his brother and sisters grew up making many wonderful memories out on the farm. Wayne graduated from Bowling Green High School in 1964, and studied to be an electronic technician at Ranken Technical School. He served his country in the Vietnam War, working on radio communications. He worked for Leland Gilllum repairing televisions at Gillum’s TV and later bought the business, renaming it Seiller’s TV. In the mid 1990’s, he and Nellie purchased a Radio Shack Franchise and ran it until he went to work for WERDCC in 1999, retiring last year. Wayne enjoyed hunting, fishing, and boating and always had a fruitful garden. He is known for his easy-going nature and his sense of humor. Wayne loved his family perfectly and unconditionally. Memorials may be made to the donors’ choice.

Wayne Jeffrey Seiller Sr., 71, of Bowling Green, MO., left this world to be with his Heavenly Father on Tuesday, September 5th. Memorial services will be held at 7:00 pm on Wednesday, September 13, 2017 at the Bibb-Veach Funeral Home in Bowling... View Obituary & Service Information

The family of Wayne Jeffrey Seiller Sr. created this Life Tributes page to make it easy to share your memories.

Send flowers to the Seiller family.