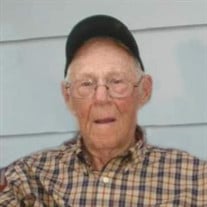 William Kenneth “Bill” Mallory, 101, of Bowling Green, passed away Monday, January 10, 2022 at Hannibal Regional Hospital. Funeral services for Mr. Mallory will be held Saturday, January 15, 2022 at 10:00 a.m. at the First Christian Church of Bowling Green with Rev. Bruce Moeller officiating. Burial will be in Green Lawn Cemetery. Visitation will be Friday, January 14, from 3:00 p.m. to 7:00 p.m. at Bibb-Veach Funeral Homes & Crematory in Bowling Green. Bill was born March 14, 1920 in Clark, Missouri to John William and Eva Matthews Mallory. He was united in marriage to Rheba Gibbs on December 1, 1946. She preceded him in death on June 23, 1999. Bill grew up in Clark, Missouri on the family farm and attended Clark Schools. He graduated high school in 1938, then attended two years at Moberly Junior College, and the University of Missouri. When WWII erupted, Bill joined the Army/Air Corp in 1942. He completed flying missions out of Italy, serving as a tail gunner, bombing over Germany, Czechoslovakia, and Yugoslavia. After returning from the war, Bill returned to the University of Missouri, and completed his degree in Ag Science. He met and married Rheba Gibbs. Three children were born to this union. Bill worked in Carrolton and Troy, Missouri with the University Extension, teaching Veterans for 11 years. Once that program ended, Bill needed to decide what his next adventure in life was going to be. He returned to the University of Missouri and earned his Education degree. Soon after, Bill began teaching at Bowling Green R-I school for the 1961-1962 school year. Although Bill retired in 1989, he is well-remembered, and his presence will forever grace the halls of Bowling Green High School. Mr. Mallory touched many lives and made an impact on many students with his caring heart and nature. Bill was involved in many community organizations, including the Lions Club, Masons, Shriners, VFW, the Retired Ag Teacher’s Association, Pike County Fair Board, Pike County Pork Producers, and MSTA (Missouri State Teacher’s Association). He has also carried the title of Bowling Green Citizen of the Year, as well as receiving the Honorary American Farmer Degree. Bill enjoyed gardening, especially growing tomatoes, sweet corn, and strawberries. Later in life he also enjoy growing flowers. He would take his golf cart out to his garden, just to watch it grow. Bill would find places around the house to plant flowers. He also enjoyed fishing, and his family fishing trips to Bennett Springs were some of his favorite memories. Bill like watching people work. He also enjoyed watching sports on TV, along with veterinary shows with Dr. Pol. Although he didn’t like to travel much, Bill and Rheba did make a trip back to England in 1991 to visit Valley Wales and London. Bill is survived by sons Doug Mallory (Ruth) of Paris, Missouri, Greg Mallory (Carey) of Orland Park, Illinois, and Jerry Mallory of Orland Park, Illinois; grandchildren Paige Mallory, Daniel (Meagan) Mallory, and Patrick Mallory (Tina Bacon); 10 great-grandchildren; sister, Mildred Troyer of Centralia, Missouri; and numerous nieces, nephews, and extended family; not to mention a community that loves him. Bill was preceded in death by his parents; wife, Rheba; sister, Dessie Aufdembrink; and brothers-in-law, Jack Troyer and Ben Aufdembrink. Pallbearers will be Patrick Mallory, Daniel Mallory, Mike Troyer, John Troyer, Don St. Clair, and Brock Bailey. Memorials may be made to the BGHS Bill Mallory Ag Scholarship Fund.

The family of William "Bill" Kenneth Mallory created this Life Tributes page to make it easy to share your memories.

Send flowers to the Mallory family.