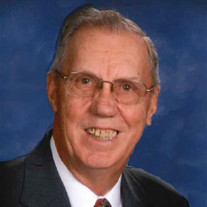 William Martin Peasel, age 79, of Silex, departed this life on Saturday, May 13, 2017 at 7:56 pm at the Elmbrook Memorial Hospital in Brookfield, WI. Funeral services will be held 10:00 a.m., Wednesday, May 17, 2017 at the St. Alphonsus Catholic Church in Millwood with Fr. Charles Tichacek and Fr. Kent Pollman officiating. Burial will be in the St. Alphonsus Cemetery. Visitation will be held from 4:00 – 8:00 p.m. Tuesday, May 16, 2017 K of C Hall in Millwood. Bill was born November 11, 1937 south of Millwood at the home of his parents, William and Dora Stepanek Peasel. He was married June 20, 1959 to his soul mate, Barbara Pollman. They celebrated 57 years of marriage. He is survived by his loving wife Barbara; children Sheri (Roger) Hoenes of Branson, Mark (Lisa) Peasel of Troy, Marvin (Teri) Peasel of Troy, Rob (Carrie) Peasel of Wentzville; grandchildren Amanda Hoenes of Brookfield, WI, Matthew (Jessica) Hoenes of Glencoe, IL, Tara Peasel of Lake St. Louis, Jenna Peasel of Troy, Krista Peasel of Lake St. Louis, Ryan (Jamie) Peasel of Troy, Tyler (Deanna) Peasel of Troy, Kyle (Becky) Peasel of Troy, Brooke & Paige Peasel of Wentzville; great grandchildren Ellie & Parker Hoenes, Hadley & Henry Peasel, Kollins Peasel, and Nash Peasel; brother Ron (Susan)Peasel; sister Betty Mudd; brother & sister in laws Martha Peasel, Stanley (Marcella) Pollman, Rick (Jennie) Pollman, Janet (John) Creech; and many nieces, nephews and cousins. Bill was preceded in death by his parents; brothers Kenneth, William D, Melvin (Rita), and Bob; sisters Leola (Ted) O’Came, Geraldine (Sidney) Harrell, Mary Ruth (Al) Twellman; and brother and sister in law Sam Mudd and Jimee Peasel. Bill attended his first 3 years of grade school at Barnable Schoolhouse near his home on Lead Creek before transferring to St. Alphonsus Grade School in Millwood. He completed four years at Silex R1 High School, where he enjoyed playing baseball and basketball. He got a job detasseling corn in St. Charles county, then worked at the Meers Heel Factory in Troy, before farming his mother’s place when his brother was drafted into the Army. He continued to farm in partnership with his brother Bob until 1964. He went to work at Monsanto in St. Peters, which later becoming MEMC and retired in 1996. He went back to farm the land he and Barbara purchased from her parents in 1970. He loved doing things on the farm, including the big garden he and Barbara put in every year, and picking peaches, apples, cherries and blackberries so Barbara could make a cobbler for him to eat. He was a loyal St. Louis Cardinals fan. Bill loved spending time boating, fishing, hunting, water skiing, golfing, with family and friends making “Hole In One on a par three on the 8th hole at Woods Fort.” He enjoyed traveling all over the US including Alaska and Hawaii, Spain, Mexico and many cruises. One of his life desires was to play guitar so after making a Cursillo weekend in 1984 and a few lessons he joined the choir at church and enjoyed many years of playing with them, especially the Memorial Day Mass at the cemetery every year weather permitting. When he retired, he enjoyed volunteering at LCCOA taking meals to Senior Citizens and helping Barbara with their Shaklee Business since he loved the improvement in his health after taking the products. He enjoyed grilling hot dogs for the last day picnic at Bible School, antique tractor pulls and tractor rides with his friends through the county roads. He was a lifetime member of the St. Alphonsus Catholic Church and the Knights of Columbus #2009 in Millwood. Serving as pallbearers will be his grandchildren. Memorials may be made to the K of C St. Alphonsus Repair Account, St. Alphonsus School, LCCOA, or Donor’s Choice.

The family of William "Bill" Martin Peasel created this Life Tributes page to make it easy to share your memories.

William Martin Peasel, age 79, of Silex, departed this life on...

Send flowers to the Peasel family.