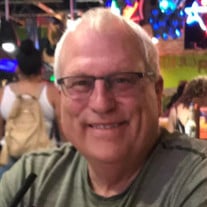 William Herbert Caldwell, 65, passed away Thursday July 2, 2020. A Memorial Mass will be held on Wednesday July 8, 2020 at 1:00 p.m. at St. Clement Catholic Church with Fr. Henry Ussher officiating. Visitation will be held from 11 a.m. – 1 p.m. at the church. Bill was born May 9, 1955 in Louisiana, Missouri to Charles Herbert and Melba (Graves) Caldwell. He was united in marriage to Janet Elaine Orf on September 30, 1978 at St. Clement Catholic Church. She survives. Also surviving are children, Tara (Ben) Seedorf of Kirksville and their children Ella (13), Nora (10), Addie (8), and Nina (6) Seedorf; Tamara (Travis) Scherder of Frankford and their children Sawyer (8), Blake (6), and Callie (5) Scherder; Caleb Caldwell of Moscow Mills; sisters, Donna Grote, Gail Branstetter, and Linda (Jim) Tepen; along with numerous brothers and sisters-in-law, nieces, nephews and cousins. Bill was preceded in death by his parents and brothers Phil Caldwell and Kevin Caldwell; and brothers-in-law Darrell Grote and Chick Branstetter. Bill grew up in Middletown and graduated from Bowling Green High School in 1973. He spent 3 years in the Army as a communications M.O.S. He was stationed in Alaska. He could still use Morse code and told many stories about his time spent in a tent. After Bill and Jan married, they lived in Bowling Green until relocating to the house they built in Frankford 8 years ago. Being in the country strengthened his love of nature; there isn’t a bird or Missouri tree that he couldn’t name. He worked as a plant operator at Louis Marsch Inc. in Troy for most of his career. After their closing, he worked at LaCrosse Lumber in Bowling Green until 2017, when he retired. Bill frequently found things that piqued his interest and sparked short-term passions, some of which turned lifelong: history, specifically World War II, politics, astronomy, classic movies, and nature. He was first to listen and then to talk. It wasn’t unusual for him to slip away from gatherings to collect his thoughts before returning with his opinion. He was passionate about politics and loved a good debate. During the last years of his life, he grew to follow and love the stock market, trading options until the day he passed away. Bill and Jan loved to travel together. Some of their fondest memories were in New Orleans, Gulf Shores, Myrtle Beach, Gatlinburg, Mexico, the Virgin Islands, and the Dominican Republic. His family coined him as “Vacation Bill” and he enthusiastically lived up to that title. Bill and Jan had a “bucket list” trip planned in September, to the Red Wood Forest, in California, to celebrate their 42nd wedding anniversary. From the day, Ella, his oldest grandchild was born, his passion became loving them. He showed his love for them by teaching them about the solar system, cartoons from his childhood, and good music. Those closest to him will never forget the way his face lit up when he saw any of his 7 grandchildren. He didn’t need to say a word, and typically didn’t; but the way his eyes smiled when he was near them is something they will cherish forever. Memorials may be made to the St. Clement Church.

The family of William Herbert "Bill" Caldwell created this Life Tributes page to make it easy to share your memories.

Send flowers to the Caldwell family.