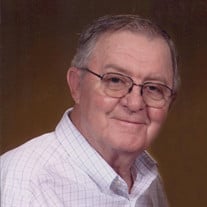 William Ellis Halliburton, 82, of Frankford, passed away Sunday, January 16, 2022 at Hannibal Regional Hospital. Funeral services will be held Saturday, January 29, 2022 at 11:00 a.m. at the Bowling Green Presbyterian Church with Pastor Jay Ayers officiating. Visitation will be from 10:00 a.m. to 11:00 a.m. on Saturday, January 29th at the Presbyterian Church in Bowling Green. William was born June 4, 1939 in Quincy, Illinois to William Alfred and Helen Ruth Kenzler Halliburton. He was united in marriage to Elizabeth Ann Steward on August 1, 1959 in Lamar, Colorado in the First Presbyterian Church. She preceded him in death on January 21, 2016. William grew up in rural Louisiana and graduated from Louisiana High School in 1957. He was active in Vo-Ag, and attended the National FFA Convention in Kansas City. After high school, William served in the United State Air Force from 1958-1965, where he served as a radar technician at multiple bases across Texas. After his service in the Air Force, William managed the Steward monument company in Lamar, Colorado. He then began a 7-year career as an over-the-road truck driver for Rancher’s Supply, until 1976. At that time, the family moved to Frankford, Missouri. In 1977 he began working for Allied Maintenance at the American Cyanamid (BASF), Hannibal, Missouri Plant. He retired in 2000. William was a member of the First Presbyterian Church in Bowling Green, where he served as a Deacon and an Elder, as well as serving on multiple committees. William enjoyed his family, and taking drives in the country. He enjoyed fishing, boating, and camping. He was also a fan of the St. Louis Cardinals, along with a variety of other sports. William enjoyed his morning coffee at Shortline 66 Station in Frankford, and his monthly lunches at Fiddlestick’s with fellow retirees. William is survived by his children: Linda Raney (Ron) of Palmyra, William Halliburton (Jennifer) of Overland Park, Kansas, Jacquelyn Thompson (Kevin) of Frankford, and Sharon Duckworth (David) of Vandalia; grandchildren: Brian Gonzales (Felicity), Samantha Martinez (Jordan), Justin Gonzales (Savannah), Erin Wilson (Kelly), Wesley Raney (Teal), Katlind Raney (Colebie Murry), Meredith Halliburton, William Halliburton, Jackson Halliburton, and Ellis Halliburton; Danielle McPherson (Najee); 19 great-grandchildren; numerous nieces and nephews; and a large extended family. He was preceded in death by his parents; his wife, Elizabeth; step-mother, Willene Halliburton; sister, Helen Anne Pratt; and three step-brothers: Jim Hedges, Dick Hedges, and Kenny Oliver. Memorials may be made to the Bowling Green First Presbyterian Church or the American Cancer Society.

The family of William Ellis Halliburton created this Life Tributes page to make it easy to share your memories.

Send flowers to the Halliburton family.