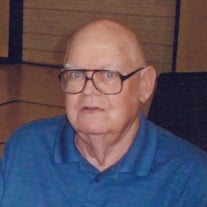 William Joseph Royster, age 83, passed away March 14, 2021 at Mercy Hospital St. Louis. Born January 14, 1938 in Silex to Ben D. Royster and Beatrice Donley Royster, he married Judy K. Duff in August 29,1964 at the St. Alphonsus Catholic Church in Millwood, MO. Joe graduated as valedictorian from Silex High School before joining the United States Army reserves in 1956, and was honorably discharged March 31, 1964. After leaving the reserves he began working at Central Grain Elevator, where he worked for many years before ending his career at Elsberry MFA in 2004. A family man with a passion for gardening, flowers, rock hunting, iron wood collecting, fishing, sports and his grandchildren. He was known by all for his prolific ability to nurture anything, diminished only by his equally prolific stubborn streak. He is survived by his wife of 56 years Judy, his three living sisters Marilou Harrison of Kirkwood, MO, Juanita Dudas of Kirkwood, MO, and Lillian (Robert) Brown of Indianapolis, IN and his sons Joe (Shellene) Royster of Hawk Point, MO and Jason (Julia) Royster Silver Spring, MD and daughter Jocelyn (Michael) Kreuger of Troy, MO. He was blessed with 5 grandchildren, Harmon and Jorgen Kreuger, Tegan and Kylie Royster, and D.J. Ridener. He was preceded in death by his brother Ben D. Royster and sister Betty Jean McDonald. A Mass of Christian Burial will be held at 10:00 am on Saturday, March 20, 2021 at St. Alphonsus Catholic Church in Millwood, MO with Rev. Charles Tichacek officiating. Burial will follow at St. Alphonsus Cemetery where generations of his family rest. Visitation will be held from 4:00pm until 7:00pm on Friday, March 19, 2021 at the Bibb-Veach Funeral Home in Silex. Serving as pallbearers will be Mike Kreuger, Harmon Kreuger, Jorgen Kreuger, Joe King, David Stratton, and DJ Ridener. Honorary pallbearers will be Bob Brown, Tegan Royster, and Kylie Royster. Memorials may be made to the Missouri Botanical Gardens 4344 Shaw Blvd, St. Louis, MO 63110 or online at https://support.missouribotanicalgarden.org/DonateNow

The family of William Joseph Royster created this Life Tributes page to make it easy to share your memories.

Send flowers to the Royster family.