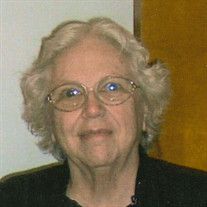 Winona Cynthia Dorsey, 88, of Louisiana, passed away Monday, October 11, 2021 at Hannibal Regional Hospital. Funeral services for Winona will be held Monday, October 18, 2021 at 1:00 at Bibb-Veach Funeral Homes & Crematory in Bowling Green. Burial will be in Green Lawn Cemetery in Bowling Green. Visitation will be Monday, October 18th from 11:00 a.m. to 1:00 p.m. at the funeral home. Winona was born on May 10, 1933 in Revere, Missouri, the youngest child of Adam J. and Cynthia Elizabeth Wallace Martin. She was united in marriage to Gerald T. Dorsey on May 12, 1956. He preceded her in death on June 18, 2018. Winona grew up in Revere, Missouri on the family farm. She graduated from Revere School in 1951, then attending Northeast Missouri State Teacher College, also known as Kirksville State, where she earned her teaching certificate. From 1956 to 1957 she taught in a one-room school house, Duncan School, in Duncan, Missouri. Upon her marriage, Winona devoted her time and energy to her family as a housewife and homemaker. Winona enjoyed bowling and attending ballgames, especially games of her grandchildren. She was an avid St. Louis Cardinals fan, and also enjoyed watching Monday Night Football. Winona was known for making the best pancakes. She was always asking her children “Do you know anything?”, as her way of keeping up with family and friends. One of Winona’s greatest joys was visiting with her family and friends on holidays and visiting her brothers and sister. Winona is survived by children: Candy Burnett (Kenney Law) of Louisiana, Gerald “Jerry” Dorsey (Lisa) of Louisiana, Mark Dorsey (Lori) of Clarksville, and Thomas Dorsey (Erin) of Middletown; 17 grandchildren; 19 great-grandchildren; nephews, nieces, and numerous cousins. Along with her husband, Winona was preceded in death by her parents; an infant child; four brothers; and 1 sister. Pallbearers will be Shawn Burnett, Craig Burnett, Kane Law, Raymond Elliott, Adam Falloon, Ethan Calvin, Jacob Wright, and Michael Lester. Memorials may be made to Peaksville Christian Church or to the donor’s choice.

The family of Winona Cynthia Dorsey created this Life Tributes page to make it easy to share your memories.

Send flowers to the Dorsey family.